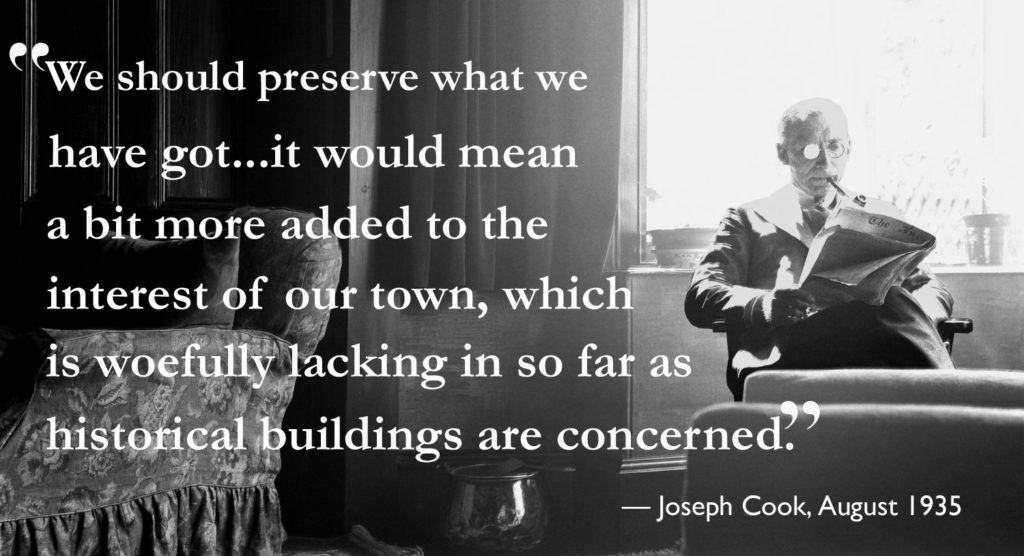 The house once located within Abertarff Close off Church Street is the oldest surviving secular building in Inverness. Commonly misnamed Abertarff House, it was begun in 1592 and for years was hidden by the buildings in front of it which had been erected towards the end of the seventeenth century. The house in the close was in a ruinous condition before the front houses were removed and it was opened to Church Street.

In August 1935, on the occasion of a Rotary Club meeting about the preservation of the house, Joseph Cook said: 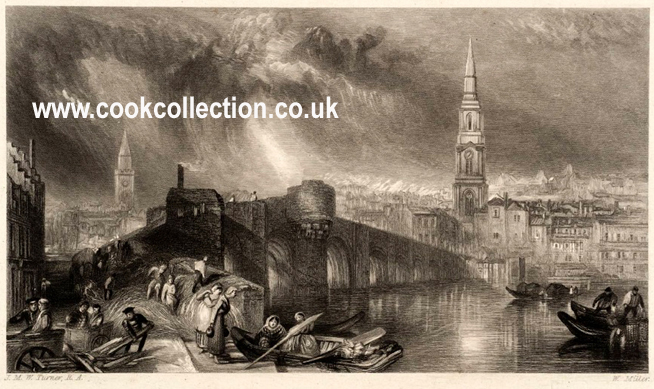 An etching of Inverness in 1834-36 based on Joseph M.W. Turner’s watercolour. The tiny original painting by Turner is held by the Inverness Museum & Art Gallery.

“We are privileged to live in a very old and beautiful town, the history of which is lost in the passage of time. Underneath the ground, if anything is discovered that dates back to Culloden days, we fondle it as a treasure and invite the Sassenach to visit our museum. Old prints of Inverness are of a general interest. Did not the great Turner paint the picture of Inverness from the other end of the stone bridge, an engraving of which appeared in an early edition of Tales of a Grandfather? Old books on the Capital of the Highlands are eagerly bought up when offered for sale, and in many instances now fetch three or four times their original value.

“But there is another side to the picture. We as a community — as a Highland community — have lost much. Some of our old institutions have been destroyed unmercifully. Where is the old fair we used to have twice a year, when one could only squeeze their way through between the stalls at the junction of High Street and Petty Street, and right down Inglis Street, and bargain with the hucksters over candy or cheap jewellery, or perchance to see the tail end of a row [fight] opposite Mr Smith the Barber’s? 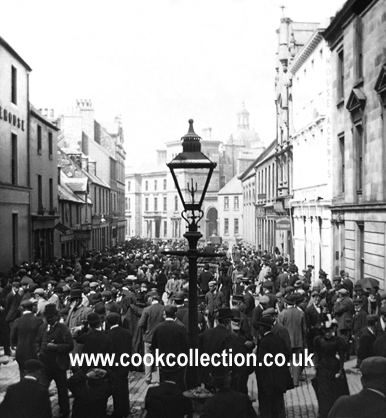 “The Cheese market is unknown to modern Inverness, and the younger generation would look askance if you told them that the Sacrament service of the old Free North Church used to be held among the tombstones in the Chapel Yard.

“We are now at the stage when we should preserve what we have got. Hidden away in an old court in Church Street there stands a building weathered with age, a beautiful relic of Old Inverness, built in the Scots baronial style — the last of its kind in Inverness. At one time there were many such buildings. A very good example once stood on the Castle Wynd, but it has long since been done away with.

“The house of which I speak stands in Abertarff Close, Church Street, next to the Commercial Bank, and belonged at one time to a Mr Suter, wine merchant, who bought it from Mr Warrand of Warranfield. A son of the famous Lord Lovat of the ‘45 was very anxious to buy the house for a very interesting reason. He lived in dread of a French invasion of the town, and as this house had a pathway and steps leading to the river, he thought that if ever the time came, he could easily make for the river and pull round to Beauly in his boat. He employed his factor, Mr Lockhart Kinloch, to carry out the purchase, and Mr Suter, thinking the house was for the factor himself, let him have it cheap, the price being £500 or £600. When Lovat heard of the sale and the price paid, he said. ‘The man was a fool to sell it at that price.’ 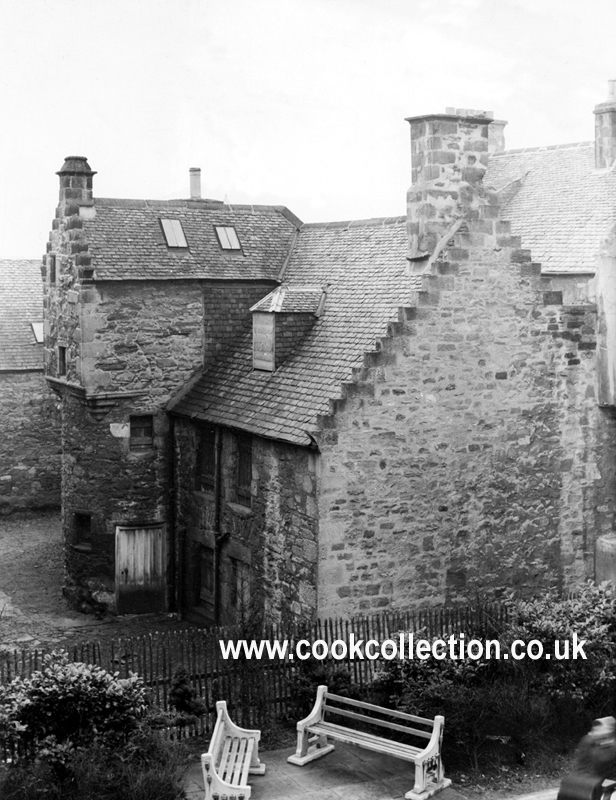 The house in Abertarff Close was built in 1592 and is the oldest  secular building still standing in Inverness.

“But that is all past history, and what we are confronted with today is a generous offer whereby this old property can be acquired by the town, on certain conditions.* If accepted, the offer would result in an improvement that would enhance the beauty of the town, and would ensure the preservation of at least one old building to let present and future generations know what kind of dwellings the people of Inverness lived in when Wade made his roads and when Prince Charles Stuart led out the clans to try his strength against the Duke of Cumberland.

“If you look at the old Dunbar Hospital, you will find there a fine example of what can be done to preserve pictures of the past. Many of us remember when that building was fast crumbling into decay, but when put into the hands of the architect it was preserved for not a few generations to come.**

“If the subjects in question were properly treated, and something brought back of the old atmosphere, it would mean a bit more added to the interest of our town, which is woefully lacking in so far as historical buildings are concerned.

“The question has to be asked, what will the town have to do with it when the suggested alterations have been carried out. Preserve the building and a use will be found for it. Perhaps most people have seen the book of old Inverness prints by the late Mr Delavault. Here they had a Frenchman so enamoured with the old burgh that he puts in colour — and that very beautifully — most of its interesting places, and among them is included the old Abertarff House. After all, should it require a stranger to point out to us what we ought to cherish around our own doors? 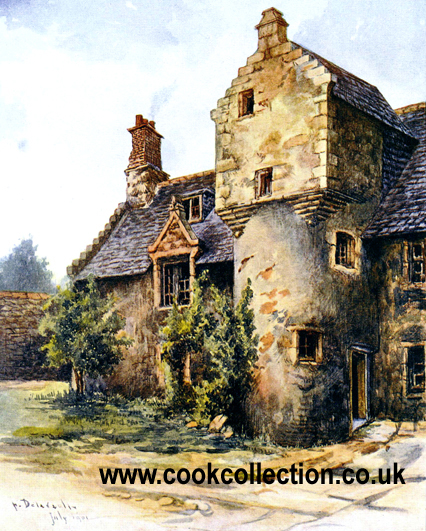 The painting by Pierre Delavault in July 1901.

“Old Inverness is almost gone, its manners, its customs, its institutions; let us try to preserve what we have left, and let it not be said of us that when an opportunity arose to improve the amenities of the town, we were found wanting.”

The audience replied with enthusiastic applause, and one wonders if today that the sentiments of Joseph Cook’s words from over 80 years ago, echoing down the years, still have meaning to the residents of Inverness today.

* The conditions on which the Commercial Bank were prepared to hand over the property in Abertarff Close to Inverness Town Council, recorded in the May 1933 minutes, were:
(a) that it be used as a museum or for some other public purpose.
(b) that the block of shops and houses also belonging to the Bank facing Church Street be demolished to lay the old property open to the street, and that the ground be laid out as a garden or pleasure ground.
(c) that the expense of carrying out the whole scheme be borne by the town.
(d) that the property not be used other than as above; if at any time the building and grounds should cease to be so used the whole subjects were to revert and belong to the Bank.

** Sadly the stonework of Dunbar’s Hospital and the house in Abertarff’s Close were subsequently rendered (harled and painted over), supposedly to preserve the stone. It is to be hoped that such preservation is more effective than the similar treatment bestowed upon the Georgian townhouses 92-94 Academy Street, which actually caused the stonework to deteriorate to such an extent it was demolished despite having Listed Building status: “..the rendered finish is fundamentally flawed, as the wall has been unable to breathe through the cement-based render, which has aggravated the deterioration of the masonry”. (Report on Structural Conservation — 92-94 Academy Street — Elliott & Company, Consulting Engineers, November 2011)