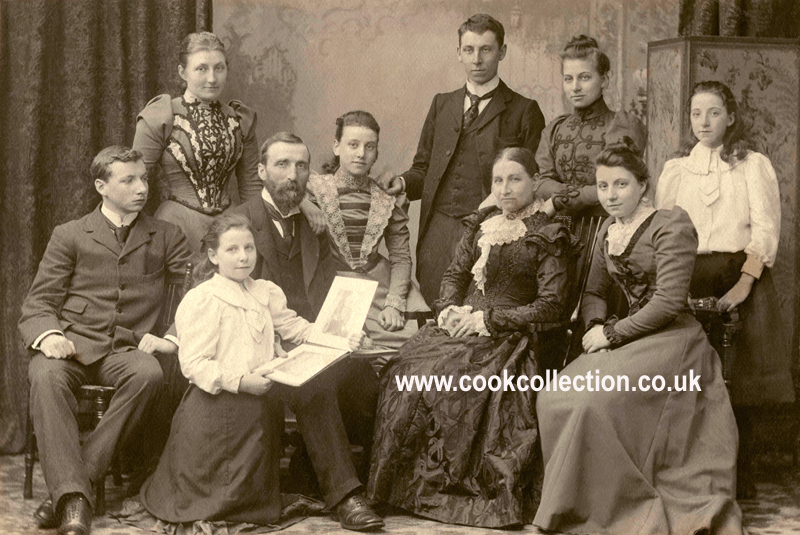 JOSEPH COOK, the son of ex-Bailie Robert Cook and Mary Walker, was born in Shore Street, Inverness on 14th October 1880. He was educated at the old High School, the Inverness Royal Academy in Academy Street (and from 1895 in the Crown), before joining the family firm of timber merchants, James Walker & Sons, located on Shore Street in the harbour area.

During the First World War he was a captain with the 2/4th and 3rd Battalions of the Queen’s Own Cameron Highlanders, and in April 1918, on being posted to the British Expeditionary Force, he served with the 1st Battalion at Noeux-les-Mines, between Bethune and Lens in the Pas de Calais. Before being demobilised he also spent some time in the forestry service.

It was while he was a captain in the Camerons that Cook married Catherine (Kate) Munro Bookless, second daughter of (the then late) James Bookless, a fishmonger with a business in Union Street. The marriage ceremony, conducted by the Rev. Alfred A. Cooper of the United Free High Church, took place at her parents’ house, The Rigg in Abertarff Road, on 20th November 1915. 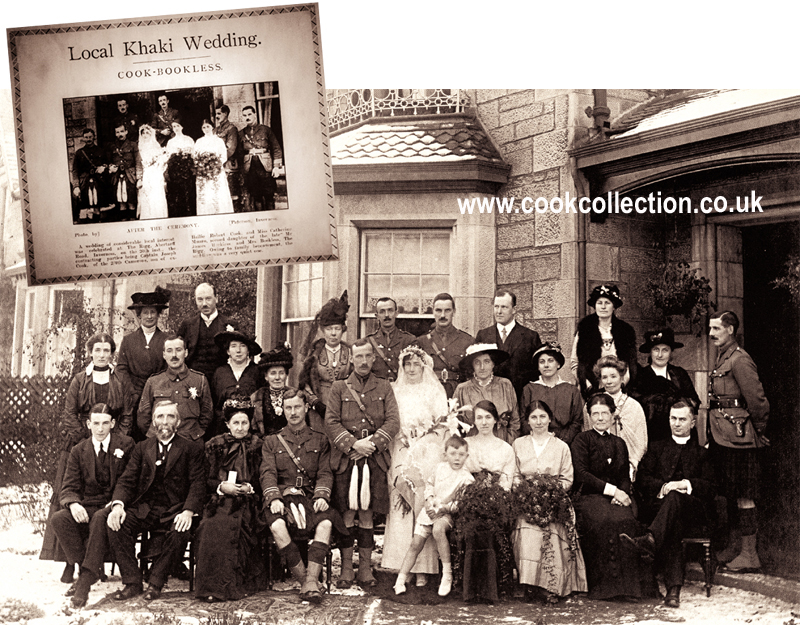 Owing to a family bereavement, the wedding was a very quiet one. His friend, the local award-winning portrait photographer Andrew Paterson took the wedding photographs. He and Kate first lived at 7 Muirfield Road (originally Herr Paul Waack’s preparatory school for boys) before building a new house in the garden, which became number 15.

For many years Cook took a keen and practical interest in the Highland Orphanage in the days when it was on Culduthel Road and had its own school, and he was known and revered by countless Orphanage boys and girls. Kate ran sewing parties to make clothes for the children, and Cook himself later became Honorary Secretary of the Orphanage. 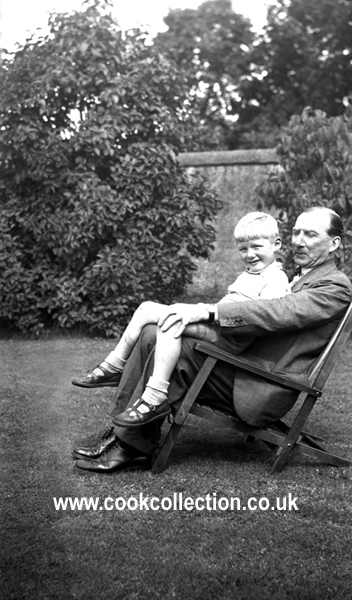 Young Charlie Massey of Edinburgh was    evacuated to live with the Cooks during the Second World War.

The couple had no children of their own, but during the Second World War they took in an evacuee child from Edinburgh, Charlie Massey, who eventually stayed with them after the war as part of the family. 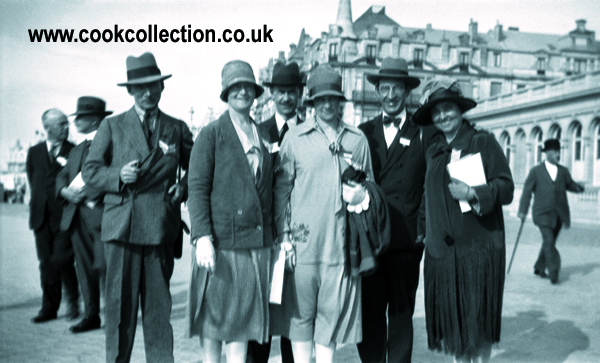 Post-war trip to Europe. At left Joseph and Kate Cook and at far right Andrew and Jean Paterson.

After the First World War Joseph Cook and Andrew Paterson toured the western front battlefields together with their wives and friends, in order to visit the final resting places of their respective brothers-in-law, who had been killed in action. Second Lieutenant James D. Bookless had died at Boulogne on 24th May 1915 of wounds received at Festubert on 17th May.

On the death of his father, Cook became manager of the sawmill in 1921 with an office overlooking the harbour and held the post for 41 years. 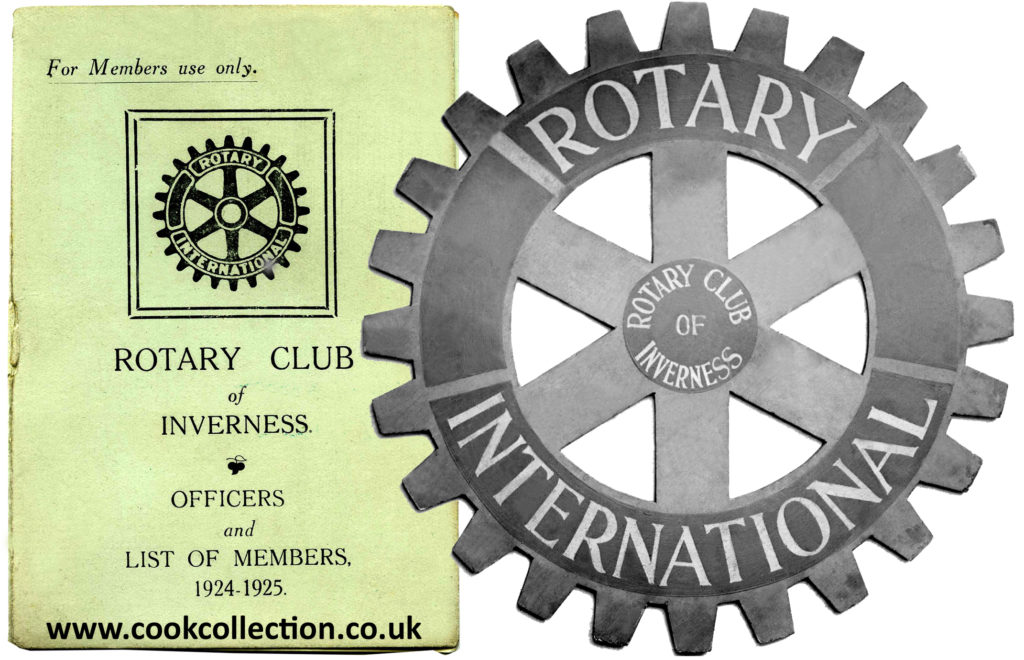 The foundation meeting of the Inverness Rotary Club took place in the Palace Hotel on 26th October 1921. There were about 50 Rotary Clubs in the UK at that time, eight of which were in Scotland and 15 in the course of foundation. About 40 business and professional men of the town assembled under the chairmanship of Provost Donald Macdonald, who formally proposed that the club be formed. It was seconded by Archibald Chisholm, sheriff-clerk, and passed unanimously. Provost Macdonald was elected first club president; Mr A. A. Chisholm, vice-president; and Mr E.G. Critchley, secretary. A council was formed comprising Evan Barron, W. H. Fowke, W. M. Gossip, Andrew Paterson, John Young, and J. Mactavish. Joseph Cook later served as President of the club from 1927-1929, and by all accounts he rarely missed a meeting. 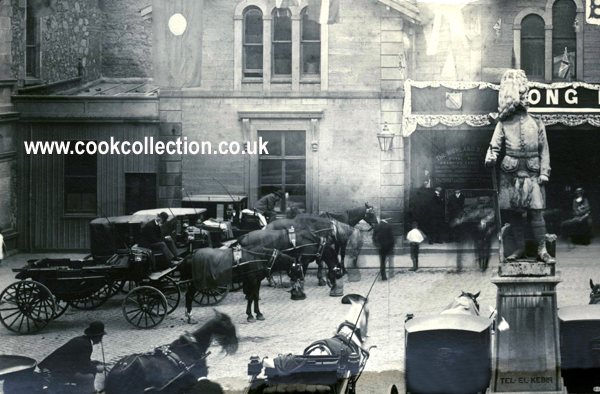 But in his own lifetime Cook was often referred to as the ‘best-known citizen of Inverness,’ thanks to the popular lectures he had presented over the years about its places of historical interest and its characters.

In the 1930s Cook had begun to feel that he should share his memories of the past with his fellow townsfolk, and his lectures were visually accompanied with the aid of lantern slides made from his photograph collection by Andrew Paterson. His first talk was a lecture to the Rotary Club in January 1934, when he spoke on the subject Inverness 40 Years Ago. (i.e. the 1890s). The following April he read a paper to the Scientific and Field Society on Inverness Harbour and sea stories of the port. As befitted a man who was proud to have been born on ‘the Shore,’ and whose business life took him daily to the harbour, Cook was a fountain of knowledge about Inverness as a ship building centre in the days of sailing ships and afterwards. A series of articles he had written for The Inverness Courier had already been published in book form as The Port of Inverness in 1931. 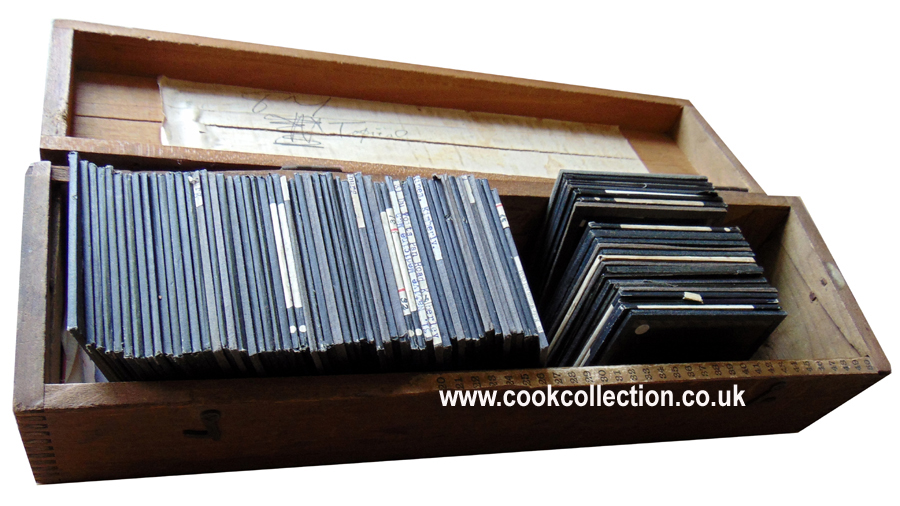 The first lantern slide show (the lantern being operated by a Mr Jack D. Barclay) was entitled Down the Years and took place on 8th February 1937. Dedicated to all who loved the town, it was held in aid of the Northern Counties Infant Home, and the proceeds raised came to £29. Over the years he continued the lecture series, well into the 1960s, with the aid of many people including the young Derick Henderson who also operated the lantern slide.

Joseph Cook, until failing eyesight made it impossible for him to continue, was also an accomplished artist, a self-taught watercolourist, and a precise and competent dry-point etcher. Two of his plates of Cromarty and Avoch fishing boats were bought by a firm of London art publishers. 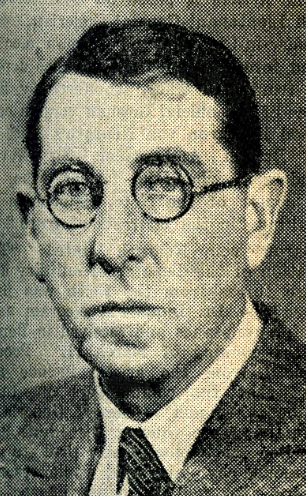 Cook’s brother James Charles Cook was born in 1877, and also educated at the High School and IRA. He served his apprenticeship as an architect with Messrs Ross and Macbeth of Queensgate at the time when they were engaged on work for many important buildings in the North, including Skibo Castle. 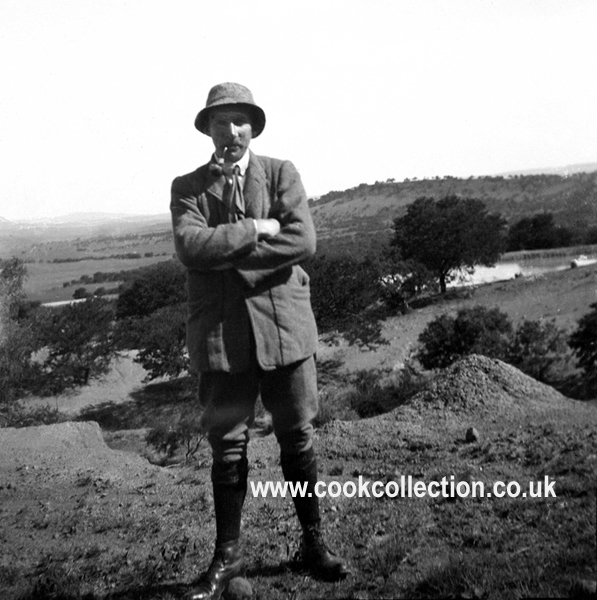 Joseph Cook on one of his many trips to visit     his brother in Africa.

In 1909 he settled in Boksburg in the Rand, South Africa, and such was the high regard in which he was held by the community that he was twice appointed mayor of the township and served for a period on the Transvaal Provincial Council. At the end of the First World War he moved to Johannesburg and established an architectural practice. Employing a large staff, becoming one of the city’s best architects and was responsible for designing many of the most imposing buildings in the city, including Broadcast House and His Majesty’s Building.

He owned a farm of 700 acres in the Transvaal but never lost interest in his native town and its affairs, and he and his wife paid several visits to Inverness, their last being in 1950. Joseph and Kate Cook visited James many times too, and there is an extensive collection of hundreds of photographic negatives taken by Cook during these visits, including sketchbooks with his drawings of people and places. 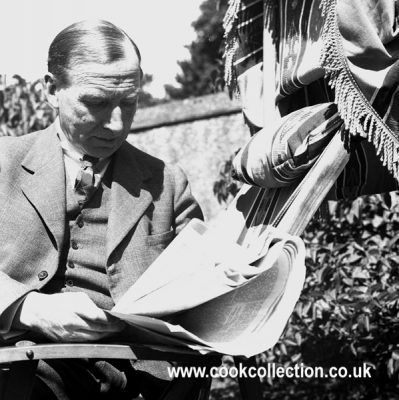 Joseph Cook retired in November 1962 after an association with the sawmills of 65 years, 42 of those as Managing Director. James Walker Ltd was taken over by John Fleming & Co. Ltd of Aberdeen. The change in ownership only concerned Inverness and didn’t involve the Leith operation, which continued in business under George Walker.

Joseph and Kate Cook celebrated their Golden Wedding Anniversary in November 1965 by entertaining their many friends in Kingsmills Hotel, but sadly, Kate died the following year. 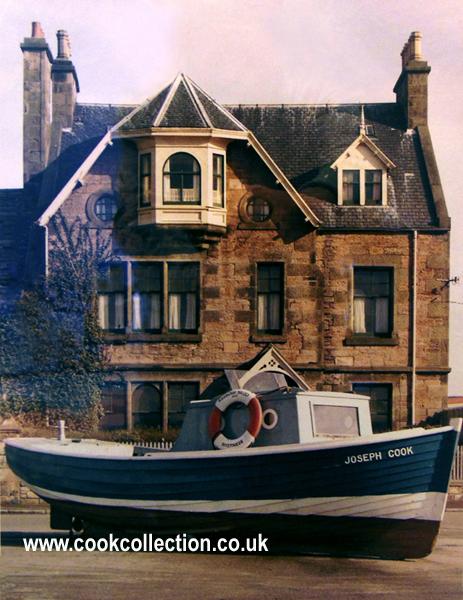 The harbour craft Joseph Cook in front of Cook’s birthplace and the Walker’s Sawmill head office.

Cook was for 50 years a member of Inverness Harbour Trust, and when he attained the jubilee of his membership in 1970, his fellow Trustees entertained him to lunch at the Caledonian Hotel and presented him with a colour photograph of the former Cook family home on Shore Street, where he was born (and which was later used as offices of the timber merchants’ business), featuring the Harbour Trust launch, the Joseph Cook, on the roadway outside. Both building and launch are now long gone.

After tributes had been paid, Cook thanked them for their gesture and explained he had never expected to be a member of the Trust. However, one day, after returning to Inverness after the First World War, he had received a letter from the Trust Clerk asking him to drop by the Town Hall. At the meeting the Provost mentioned his name and that he had been appointed to the Harbour board. “That was the first I heard of it,” said Cook, “and I have attended the meetings ever since.”

As a founder member and past president of the Inverness Rotary Club, he also spoke at its jubilee dinner in the Station Hotel in 1971.

Joseph Cook had been in failing physical health for some years when he died aged 92 years old on 12th April 1973 at his home in 15 Muirfield Road. A service was held at 11am on Saturday 14th April in St Columba High Church, of which he had been a deacon for many years, and the funeral took place afterwards to Tomnahurich Cemetery. He was described in his obituary as being “amiable with a charming manner and possessing a great, if not to say, pawky sense of humour.” 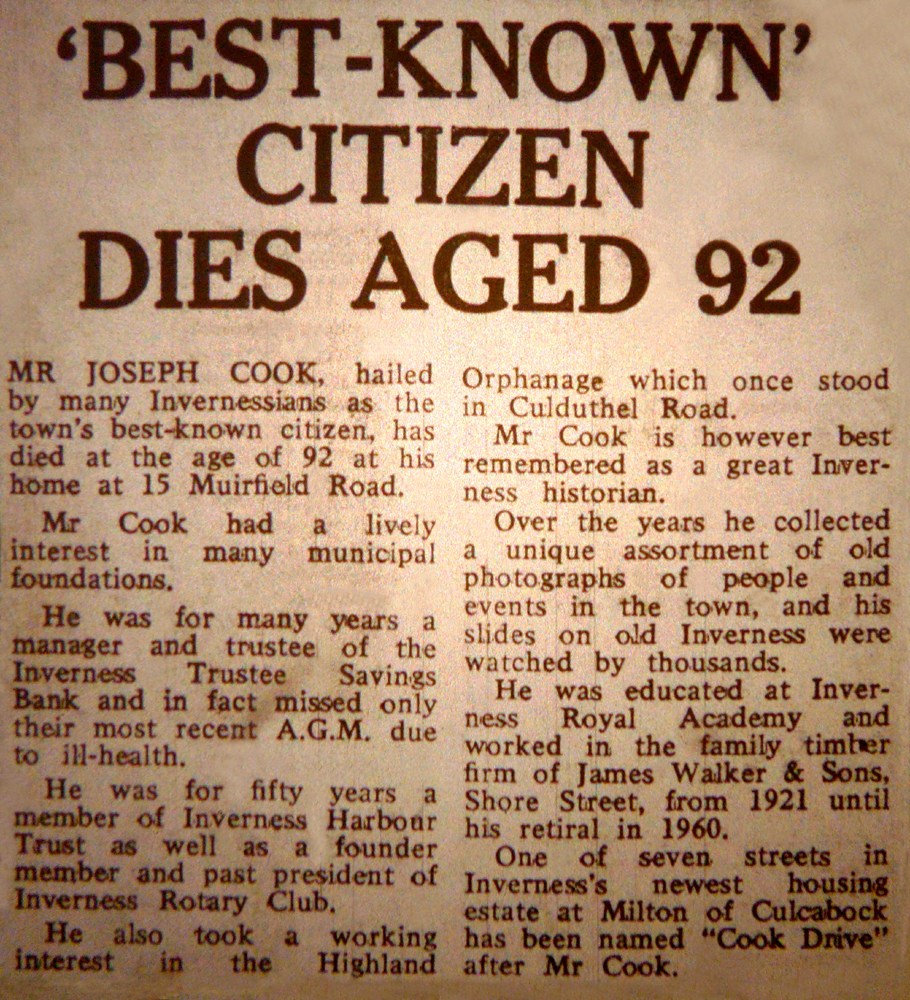 One week after his death it was announced that Cook Drive, in the newly built housing estate at Milton of Culcabock, was to be named after him. 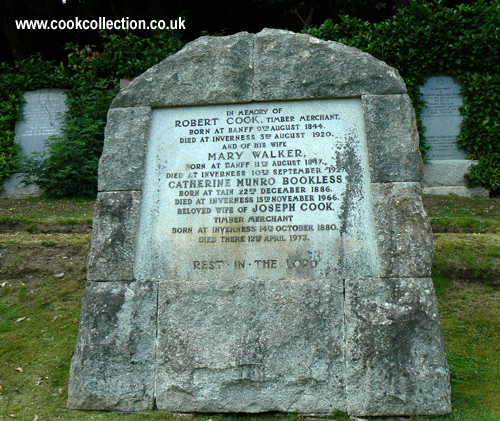 His collection of photographs were bequeathed to James M. Sinclair, who unfortunately died not long after. The collection was then taken into care by the Rev. Derick Henderson who continued to present the talks for many years using Cook’s own notes. The collection of lantern slides were later donated to Inverness Museum & Art Gallery, and many of them are available to view on the Am Baile website. Original negatives of the slides are also held in the Andrew Paterson Collection, and Cook’s original photographs and documents are held by the Massey family.