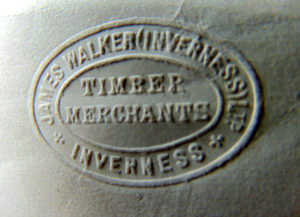 Joseph Cook, for so long a diligent Harbour Trustee, used to assert that the harbour did not grow because of the town, but that Inverness grew because of its harbour. The modernisation scheme of the 1850s, under harbour engineer Joseph Mitchell, gave the harbour its present shape by intensive dredging and the formation of embankments and towpaths. Thornbush Quay was extended and an embankment created to carry a towpath out to Carnarc Point to help sailing ships into and out of the harbour. In his 1931 book Port of Inverness, Joseph Cook wrote a descriptive passage which conjures up the scene:

“Imagine the sun high in the heavens, a full spring tide, the sails of the old windmill on the Ferry Road are almost motionless, there is a brig just entering the river mouth… The crew run a rope ashore to Carnarc Point, where await three horses to take her in tow, they hitch on and begin their long pull up the river. It is a slow job, but it is the horses’ daily task, and they move along with rhythm… they move over Thornbush Quay, and at length reach the towpath on the Capel Inch. As the ship bends into the channel she gets further away from the towpath, and more rope is played out. Slowly but surely the horses reach the old Customs House, and the ship is almost abreast of the old quay, a shout comes across the water, ‘Let go,’ the tow rope is hauled in and the ship soon moored in her berth.” 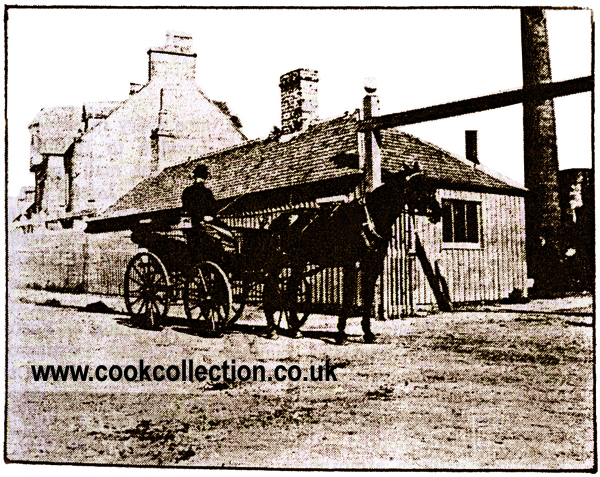 The Shore Street entrance to Walker’s Sawmill on the site of             John Cook’s shipyard.

Walker’s Sawmill on Shore Street had much to do with this growth and had been bound up with the development of the Caledonian Canal and the harbour of Inverness since its inception in 1863.

It is believed a small sawmill had been in operation in the Shore district long before the arrival of the ambitious Banffshire youth James Walker, who was to lay the foundation of the firm. The area has had such name variants as the ‘Shore,’ the ‘Ramparts’ and the ‘Citadel’ and vied with its neighbour across the waterway — the Merkinch — in useful productivity.

The population was only about 12,000 at the time. Union Street was just being built; the districts which afterwards became Southside Road, Ardross Street, Fairfield Road, Innes Street and the whole of the Crown lands were still under grass. The railway system was only in its early stages. In 1862 the first line north of Inverness, with Dingwall as the then farthest place of call, was completed. 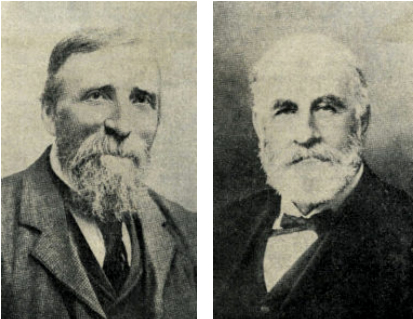 The company was founded in 1863 by James Walker and his younger associate Robert Cook. When James died he was succeeded by his brother George Walker, who died in 1901. His son James succeeded him, and in 1921 he went to manage the company’s sawmill in Leith, while Joseph Cook became Managing Director of the Inverness operation upon the death of Robert Cook the same year. James died in 1958 and was succeeded by his son George. When Joseph Cook retired in 1962, the Inverness sawmill was sold on. It had been a firm noted for its generous treatment of employees and for the consequent life-long service given by many of its staff.

But it was in 1863 when James Walker, of Banff, recognised the town and port of Inverness as a good place to start a timber importing and saw-milling business. He purchased the shipyard in Shore Street belonging to John Cook (no relation), and the firm of James Walker & Co. became a business reality. The launch announcement of 1st April 1863 read: 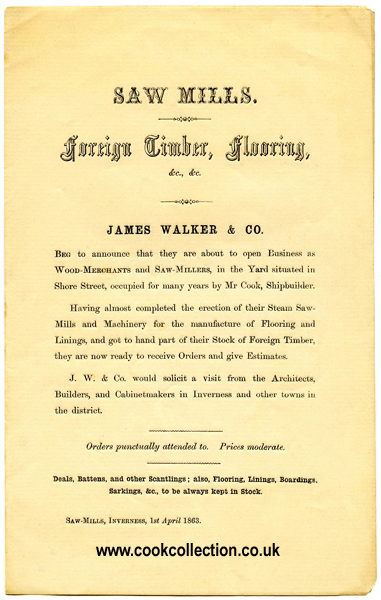 Beg to announce that they are about to open business as wood merchants and sawmillers in the yard situated in Shore Street, occupied for many years by Mr Cook, shipbuilder.

Having almost completed the erection of their steam sawmills and machinery for the manufacture of flooring and linings, and got to hand part of their stock of foreign timber, they are now ready to receive orders and give estimates. James Walker & Co would solicit a visit from architects, builders and cabinetmakers in Inverness and other towns in the district.

The day their steam boiler arrived, a half dozen horses had to be requisitioned from Messrs Wordie to tow the boiler from the railway station to the Shore. It is on record that it caused a sensation and crowds lined the street to watch the ‘event.’

Within a few years James Walker, who had also been in keen demand as a speaker and preacher, died. His brother George gave up his own business in Banff and moved to Inverness in 1865, taking over his brother’s partnership; it is to him and Robert Cook that the rapid development of James Walker & Co. was due.

Robert Cook was a town councillor and Bailie of Inverness for many years and also a member of the Harbour Trust with a deep interest in politics and church affairs. As a young man he found much pleasure in his sailing boat. He also rode a bone-shaker in the early days of cycling and had a great interest in music, possessing a mellow baritone voice.

James Walker & Co. pursued a considerable trade with Norway in hewn logs, which were sawn to various dimensions in Inverness. They dealt with all sorts of soft and hard woods, supplying contractors engaged in construction works all over the North. From the Baltic countries came cargoes produced in Finland, the Scandinavian countries and Russia. In fact, the firm’s name alone would later ensure the safe delivery of any letter posted in Canada or from some of the other forested belts in Norway or Soviet Russia. 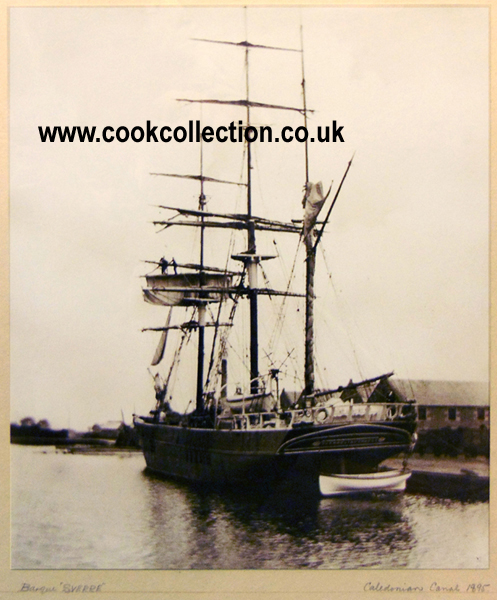 The Sverre in the Caledonian Canal, 1895.

Walkers brought the cargoes into the Caledonian Canal, and the log timber was seasoned in the water of the Basin. The company used to run their own ships, notably the sailing barques Sovereign,* Aurora, Elizabeth and Sverre, trading with the Baltic and with Canada, carrying wood to Inverness, but much of the chartering had to be done with other shipowners, and later, steamers began to be used by the firm. These schooners and other sailing craft brought timber to the Caledonian Canal basin, and from there the cargoes were taken by horse and cart to the wood yard, about one mile distant. 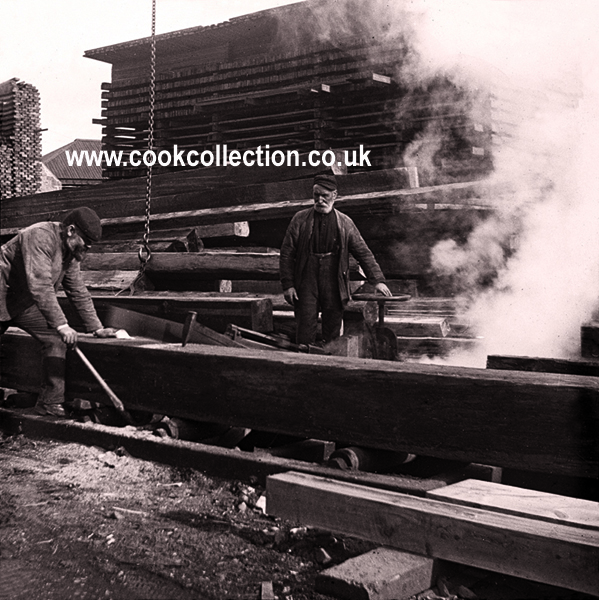 Over time various pieces of equipment and machinery were added to the original outfit,  including the installation of a second mill building, each of the two buildings housing a complete mill. This turned out to be fortunate, as one wet winter morning a fire broke out and one mill was destroyed. For months afterwards day and night-shifts worked in the remaining building until new premises were erected. 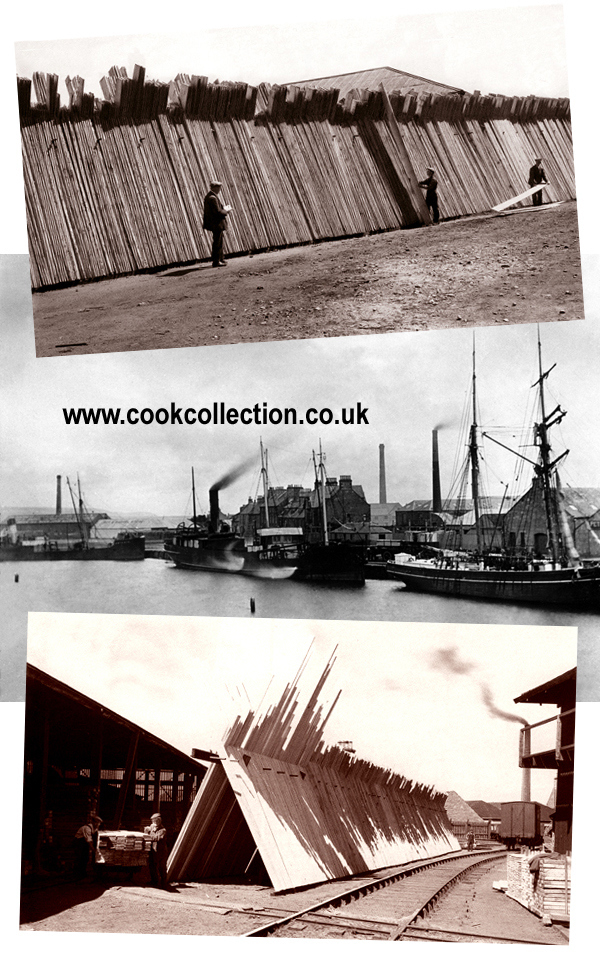 The timber yard in 1938, the 75th anniversary of the sawmill.

When opportunity offered, the company bought land around their original acre and extended the premises. A railway siding was built and later other facilities added, including a new steam engine. Bogie lines were laid down, greatly easing the hard work, and later a wire rope and power from the steam engine aided or replaced both horse and human labour by drawing the bogies on a narrow gauge line, and lorries and tractors began to be used for deliveries to customers.

James Walker & Co. supplied wood to all parts of the country. In addition to the main selling line of imported white and red pine, they did a considerable business in Continental hardwoods, American and Canadian wood, and woods from Africa, Burma, Australia, Japan, Borneo, and the Philippines

Later, as the fast delivery of seasoned wood was made possible by the use of drying kilns, hand, steam and electric cranes were installed, and around 1908 a creosoting plant was laid down.

George Walker died in 1901. A one time member of the Inverness Town Council, he was also Harbour Trustee for many years, a director of the Caledonian Bank, an elder of his church, and president of the YMCA. His chief interest, however, had been the Highland Orphanage, of which he was trustee and secretary from its inception in 1880 until his death.

In 1913, in order to expand and to take advantage of the better shipping facilities and closer contact with the continent, the firm acquired a small timber merchants business, the Restalrig Sawmill in Leith, but the outbreak of war in 1914 prevented the plans from maturing. It eventually became a much larger business than the Inverness operation and was overseen by James Walker, the nephew of the founder. 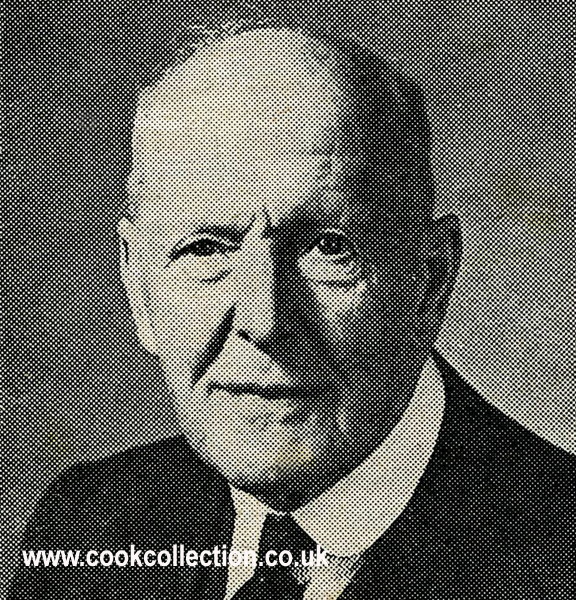 James Walker, son of George Walker and nephew of the founder, died in 1958.

After early education at IRA and the Edinburgh Institution, and a short period of training in the late 1890s in Sweden, the 15 year-old James Walker joined the firm. In 1901, on the death of his father George, James Walker became Robert Cook’s partner.

During the First World War, both the Inverness and Leith premises were taken over by the government and used as National Saw-milling Factories, mainly for cutting home-grown timber into dimensions for ammunition cases. About 60 girls and women were employed, along with a few men. 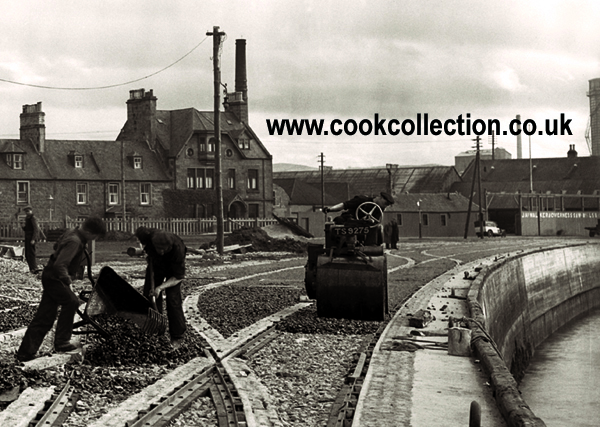 At this time Joseph Cook held a commission in the Cameron Highlanders, but in 1921, after Cook had succeeded to his father’s partnership, James Walker went to live in Edinburgh to take full charge of the sawmill at Leith.

James Walker visited Inverness every month, but a heart attack in the early 1950s curtailed his activities and restricted his attendance at the Leith office and also prevented him from paying his regular monthly visits to Inverness, which had always been arranged so that he could attend the early morning prayer meeting at the Highland Orphanage on the first Wednesday of every month at 8.00am. His father had been one of the founders of the Orphanage and Walker had been on the committee since 1901. He was Honorary Secretary for many years and was succeeded in that role by Joseph Cook when Walker moved to Edinburgh. 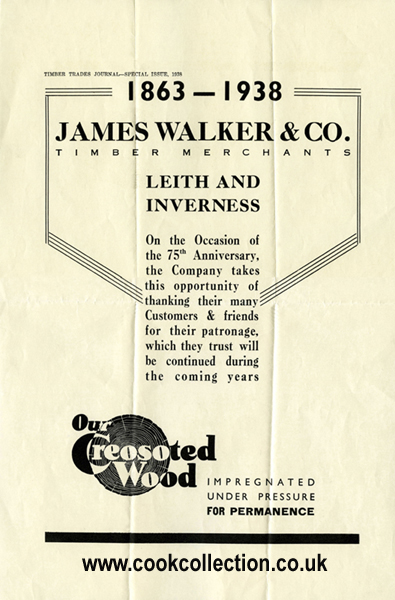 A keen Rotarian, James Walker was a member of the Edinburgh club for well over 30 years; he frequently attended the Inverness club meetings and was a staunch member of the Edinburgh-Inverness-shire Association. A lifelong abstainer, while in Inverness he worshipped at the Crown Church. (His father George had been chairman of the original committee that founded Crown Church, earning for the Walker family the nickname ‘half-Crowners’ because they also continued to attend services in their former Church, the Free High.)

James Walker died in 1958 and was succeeded by his son George.

After serving as the Inverness Managing Director for 42 years, Joseph Cook retired in 1962. James Walker Ltd was taken over by John Fleming & Co. Ltd of Aberdeen. The change in ownership only concerned Inverness and didn’t involve the Leith operation, which continued in business under George Walker.

*Sovereign was the last schooner to be built at Macgregor’s near the Thornbush slipway in 1878.

The Walker Timber Group is now a national multi-faceted organisation.